‘“Since we’re keeping it primal, you smell good,” he observed. He moved closer, making me acutely aware of his size, the rise and fall of his chest, the warm burn of his skin on mine. Electricity tingled along my scalp, and I shuddered with pleasure.’ 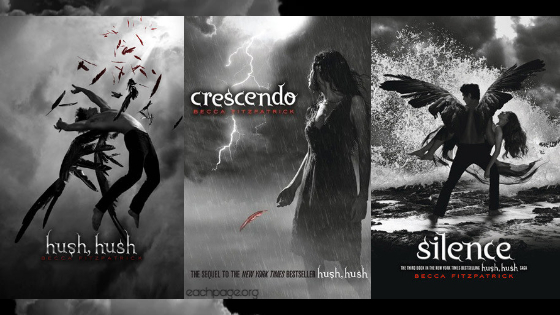 Hi, dearies! This one is different from the last one because my perspective has broadened.

Years ago, I read this cool book by Becca Fitzpatrick and then went on to the whole Saga and loved it. That book was Hush Hush. 😄📖

This year I re-read Hush Hush (book 1), thinking that I might not like it as much as I did before, that perhaps I had outgrowth it, which happens sometimes. But boy! was I wrong. I read it in days and consumed every word and didn’t remember half of what was happening in the book, which helped make me dive in and fall for Patch all over again.

But I’m jumping right into the review, let me slow down. First, let’s go with HH, then Crescendo because I have to, and then Silence.

“All this time I’ve hated myself for it. I thought I’d given it up for nothing. But if I hadn’t fallen, I wouldn’t have met you.”

Now, here is the thing, when I read Hush Hush back in 2009. I thought, wow Patch, this book, I love how this character is. Nothing beyond that, right?

The second time around, this was my thought process, I so like the dark type, so he’s a lustful fallen angel? He’s not the good guy at all at first, he really was going to kill her, he changed his mind, this book is freaking awesome, and I still love it. Enemies to Lovers. 😱😂 YA version. 📖

I still think that Nora could avoid most of her misfortunes if she just listened to what others are saying, but that’s how she rolls.

On to the next one.

Mild spoilers ahead if you haven’t read this one. Be aware!

The entire time I was reading Crescendo, I was waiting for something that happens in book 3, and it turns out that this one is like New Moon but not entirely so because Nora decided that she couldn’t trust Patch, and she went on to break up with him, even though they had been together for over a month, and yet she decided one day that the secrets that Patch was keeping, were too much for her. It didn’t cross her head that he was doing it to protect her.

Also, she deserves the award for Best at Asking Stupid Questions, at least in this book. And she really has communication and trust issues.

Nora, in most of the book, was jumping to conclusions, didn’t give anyone a chance to talk, and if the author was trying to confuse us, then she succeeded. But I was more annoyed because I knew that nothing that Nora was thinking was real. And it seemed she forgot that fallen angels and Nephilim could manipulate her thoughts and that her mind, in particular, was easy to manipulate, as we learned in Hush Hush.

Moving on to Silence.

His arms were strong, his body warm. He wasn’t wearing cologne, but there was an intriguing hint of fresh-cut grass and rainwater when he pulled me close. And those eyes. Deep, mysterious, unfathomable. Despite everything, I wanted to lean into him and … just let go.

Spoilers if you haven’t read this one.

In Silence, happened everything that I thought would happen in Crescendo, like I blocked book 2, it seems. In book 3, Nora didn’t have her memories of her time with Patch, and I was losing it because I had holes in my memories as well, but when that white Tahoe appeared, everything came back to me slowly.

Silence got me back on track to liking the saga, and then there was Patch again, and I wanted Nora to remember quickly because we would move on to the story instead of her going around town trying to recall what happened when she was kidnapped.

So, after 75% of the book, you start to see some action happening, and they get interrupted by Hank. If I were Nora, I would have screamed in frustration, unfulfillment too.

Anyways, the end of Silence was even more surprising to me. It’s like I either deleted everything from my mind, or it has been so long since I first read this book that all that was left is that I thought Patch was great, and that’s it.

So, if you read these books in the past and think you might like them again, I strongly recommend that you read them once more, a fresh perspective will appear, and perhaps like me, you will like them again from another point of view.

He dipped my body backward, drawing me up in a slow arc until he raised me flush against him. In his arms, my joints loosened, my defenses melting as he led me through the sultry steps. His muscles flexed under his clothes, holding me, leading me. Never letting me stray far.

I didn’t put Finale here because I haven’t finished. I’m barely getting started with it, and all I can remember is the ending of the book (the saga), but how we get there is almost a complete blank. I’ll be updating on it, and of course, write a review for Finale only because I feel like I’m going to have a lot to talk about as if the first time, but for my first, young view on the Hush Hush Saga, you can check my original review.

That’s it for now, dearies! Hope you enjoyed this rambling on Hush Hush, and if you have read it in the past or will in the future, don’t forget to let me know. Have you subscribed yet? You can, and you can follow me on social media too, I’d appreciate it. 😇 Thank you for sticking to the end.