Apparently, I didn’t write a post about the most amazing, awesome book in The Mortal Instruments Series.

Whoa, anyone would think I didn’t LOVE this book. Now you know, I did. It was great, I remember I would stay up late reading, I would wake up and read… think about it when I wasn’t reading it. Wish for Magnus to be on every freaking page but he wasn’t and that’s alright, Jace was or Izzy or Alec… I’m not a big fan of some but hey that doesn’t really matter, the best ones are still there.

What to say that won’t bring a spoiler? Hilarious, right? If you read the book, you would know every part of it has something that can be considered as such, so many details.

Oh, there’s this thing about Jace and Clary in a cave, which totally made me laugh when Jace…

yeah, I can’t really say that spoiler. Sorry! LOL. I totally got you there.

I’m not going to say anything, I’m sorry. This would be kind of pointless, then, wouldn’t it be? *Thinking*

Now, I thought about Magnus and then the movie…

Then I remembered this post I read about TMI being made into a TV show, and how I thought that was really cool. Even if they start from scratch which would be the wisest choice since the movie didn’t portrait the entire essence of The Mortal Instruments, Shadowhunters, among other things.

Not important right now, we were trying to talk about… Kevin. *smiling* Do you know that movie? We Need to Talk About Kevin with Ezra Miller, is a “crazy” movie, I remembered it because I said “talk about” and I saw the movie recently. I got off track, Again!

Focus, City of Heavenly Fire. Cassie Clare went off the rail with that one, I actually did like it. It had a measure of coolness, cruelty, nonsenses (very little), surprises, off-world, strategies, awesomeness, WTF moments. If you have all of that in one book, wouldn’t you agree that is totally and completely AMAZING?

There’s Sebastian, you have such hatred for the guy you can’t even read the name without saying “Argh”. You have the Seelie Queen, whom you don’t know whether to completely hate or wait one more minute to see if you should rethink the situation, and believe she’s actually a misunderstood character, she’s not.

Oh, I almost forgot about one thing that I actually didn’t get bored or wanted to speed forward, Julian and Emma. Now, that was some outside of the box thinking or wherever you want to call it. It was a nice addition/introduction to the new books. I can’t wait to read those (The Dark Artifices). 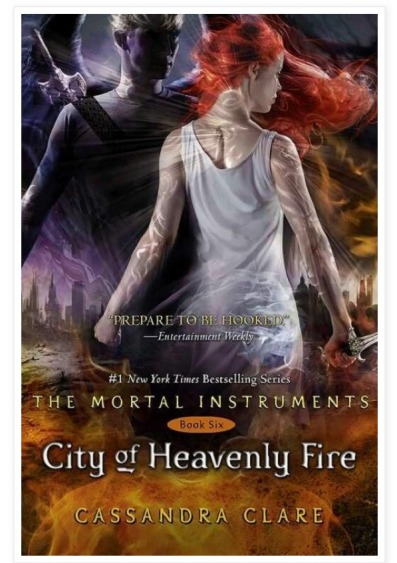 Jace, Clary, Magnus, Alec, Izzy, and Simon. What can I say? Simon did kind of earned half-a-spot in my heart on this last book, no he hadn’t before, I apologize if he has fans in the world that adore him or something, I didn’t, well I don’t love him, I just tolerate him now.

Izzy, I will always love her, the kick-ass of the group. Clary, she did some things at the end that I approved, some that didn’t make me want to yell at the screen of my phone while reading.

“Theoretically the planet could suddenly crack in half, leaving me on one side and you on the other, forever and tragically parted, but I’m not worried about that either. Some things,” Jace said, with his customary crooked smile, “are just too unlikely to dwell upon.”

“Yeah, but there’s like a 90% chance of me being right most of the time, so that’s not proof you were listening,” said Jace. “That’s just a good guess.”

Carrying on; I probably have the last 2 books a bit meshed on my mind, some scenes only. But the major ones. Those were outstanding.

Who else? Yeah, like I could possibly forget these two. Alec, COHF, he went up a notch or two on my list of male characters that are great. And finally but not least, Magnus Freaking Bane, there has not been one book in which I had not liked Magnus, no matter where I look, even when he was breaking my heart, I still thought he was the best character on the books, he is. The person who doesn’t agree, I better not say what I think of them.

I believe that’s it. You should read the books or this one, if you haven’t. I honestly don’t know what you’re waiting for. No, seriously. They are good. I know I don’t say much about the plot or what actually happened but I can’t help it, I want you to experienced first hand, is good for the brain, is a nice exercise. Well, I do hope you come back.

Don’t forget to visit all my social world with @EachPage.

One thought on “City of Heavenly Fire”