I decided to make these entries by book, why? Because they are all different, at least in character. They all have a different set of characters as the main protagonists, so this is the best way of explaining each one, also each book is great and unique; even, if they all talk about Drákon they still differ in some aspects.

I might add that they all follow a story, I have yet to read the 5th book but as far as I can tell they all have good stories, plots. Let us start with the first four books in this series.

If you haven’t read any of these books and have no idea what they are about, then refrain from reading anything but the title of the books, there might be slight spoilers ahead.

Oh dear! What a book, I was hook with this one, Shana Abé is a complete genius. We have Rue and Christoff, a power couple. Should I say it? Is it really necessary? Yes, Christoff made it to the list, to the top 10, I think I might have to make, several lists, each one consisting of 10 characters, I don’t want to left out others on 11th or 15th, if I choose them is because they are rated on a scale to 1 to 10. 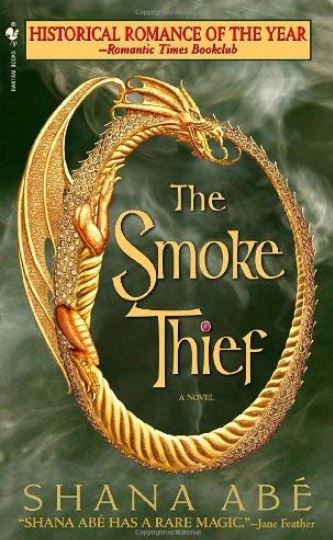 Stirring back to The Smoke Thief, what can I say? Other than it is a delightful, enjoyable, entertaining reading, I think that compiles it all pretty much.

It has Dragons, have I mentioned that before? It does. What can I say? If Dragons were around, the world would be a much better place.

The romance of the book, the history behind the name; is quite good actually, it is not your typical boy-meets-girl-falls-in-love theme, I mean of course it has those characteristics they’re there somewhere but the plot is not usual.

Rue is freak’n great, I liked that character and if you have read my older posts, you would know that I don’t say that about just anyone, normally I don’t like the female characters because they are too, girly? I don’t know, maybe it has to do with the fact that Rue is older, not a teenager. In any case, she rocks!

The rest of the books takes you forward in time, and shows you multiple events that take place on the same turf from the original characters.

“She was spirit and presence, as rare and brilliant as snowflakes in sunlight, and he could not bring himself to harm her.”

I did not want to say this but I just realized two things:

1st: that this book was good but not great, it got my attention when I had read like 50% of the entire book.

2nd: is the second book. I do not know why is it about me and seconds, or if I am not alone in this matter. But it is what it is. Second books aren’t that amazing as the 1st and 3rd or even 4th if the story continues. There are exceptions as I have mentioned before in one my entries.

With that out of the way, I would like to say that I fairly enjoyed the book, even if Lia did get on my nerves from time to time, over all I get her drift, what she was striking for, which it was kind of confusing or maybe now that I think about it, that was Shana’s idea, to get you in a numbing state throughout the book until you reached the good parts, I guess I’ll never know… But anyways, these books are set in the middle 1700’s to late 1700’s  so it should not be a surprise that Lia falls for a guy way older than her, not like 2 to 5 years older but way more. Don’t get me wrong I have no problem with that and on some key points of the book, I actually did like the male character which name I will not say, just in case you want to read.

“How unoriginal. I must be the master of understatement. I think you’re goddamned radiant, and you know it.”

I liked the main characters on occasions, and the story was interesting the only problem is, that I sometimes want to get to the good parts and the details, extreme details of the surroundings just don’t hold that much of my attention. Maybe I’m the only one who thinks like that maybe not, all I have to say is that with so many specific tiny little details, I tend to drift and start to wonder what will happen next, how would the characters develop, when would they finally realize they are madly in love with each other?

Of course, then comes the good parts and everything is alright, of course sometimes when my attention drifted then I had to go back and see where they were, because it would say: They were at the hotel… the lights were dim and the floor was this shape with a tiny spot on one of the floorboards, the barkeeper had a thin face… Come on! It wasn’t exactly like that but you can see my point, I hope.

I liked that Lia… hm! I was going to say things about Lia that are best left alone. Jesus! I can’t say a thing about this book, it would be too much spoiler. I guess you’ll have to read it. Or see Shana Abé’s website and find out more.

I love Kimber. Really I do. I don’t know why but he was great, I hoped and hoped from book 2 to have him here on book three, in fact I had all figured out for him, it had to be him, his story for the next book. Yes it could be considered spoiler to know who the main character is but I don’t care right now, suck it up.

It was the 3rd book, and it was a book. The story had some craziness, some things which I didn’t quite follow or were a bit irrelevant but the rest, the plot was quite good.

You can see more Dragons in this book, and that it is definitely a plus, a bonus, a cherry on top, did you know I like Dragons? By know you do and you are thinking that I am obsess, Lord only knows, but it might be that I am. I have to write a book that involves Dragons, I have never thought about it actually, which is rather shocking considering how much I love the bloody creatures. Anyhow, Queen of Dragons was rather impressive… oh! I just remember it has a story a bit awful, my jaw dropped; I can’t tell you what it is, it involves the main character, that’s the only thing I can say. I now you’ll be waiting for something that will leave you shaken; no matter, the whole book has remarkable bits.

One of the things I like about this one, was the end because it was a major cliff-hanger, I jumped right into the next book, which she kind of trick me, devious woman, Shana, I was totally expecting other set of characters on the 4th book, because of some “side-notes”, some remarks made by other characters.

That is why I love this author, she is a marvelous storyteller.

“I won’t trouble you long,” said Maricara. “No doubt you have all manner of pressing plans to consider. Spies to engage. Betrayals to enact. That sort of thing.”

The 4th book and final… oh wait! It isn’t. I finish the book and see an epilogue and then some facts about the next book, and I’m like: What? There is another book? And then, oh right! I know exactly about whom the other book would be all about.

The Treasure Keeper was… weird, it was. When it started I was freaking confused, I had no idea why I was reading what I was reading on those first pages, I can’t tell you what it was, it will deflect the purpose of the book. But then, I said, wait a second isn’t this…? It is, then why? And it all came to me, I suddenly knew the plot. *Laughing*

I didn’t know squat, when I think I know something then comes Shana and surprises me with a complete different twist on the book. I do have to say, that I was waiting and hoping, and praying to have the joy of reading about that particular male character, although it wasn’t what I would had expected, it was still alright and crazy. Wild, as well. Great, annoying at times, well only the heroine.

“I would give up all the summers of eternity for you. I love you. Forever and my summer days, I’ll love you.”

I have too many words to describe Shana’s books, some of them contradict themselves. The heroine, got to my nerves sometimes, I don’t know why, maybe the way she did things or how things turn out for her, I don’t know. Thinking about it, the main male character or the combination of the two sometimes made me want to be inside the book and slap them both, since there were things, which were rather obvious and they were like: oh! Why is this happening? How is it possible?

For me they were crystal clear.

I’m done with the first 4 books, the 5th: The Time Weaver. I haven’t started yet, well I did but not how you owe to start reading a book, rather I skimmed the first pages, I’m currently reading Fallen, so far she is an adolescent who is annoying and I wish for the saucy, juicy parts to arrive, I will not leave it and give up because I am certain that there is something good in that book, I can feel it.

That is it. I hope you enjoyed reading this and feel free to continue with some of my other ramblings on other wonderful books.

You can read the review for The Time Weaver now.

I don't think I've conveyed well how much I like this story. So another one on #horimiyamanga because...
It's Halloween, dearies! Favourite time of the year! 🎃👻
Takano x Onodera
And because this made me dive back into the Shadow World. No matter whether you read in order or as a stand-alone, still makes you smile and fall for them all over again, or for the first time. 📖😍❤️
Another one in the special #shadowhunters➰ love tour, not a book but a Shadowhunter as important as if he were a book, and one of my favourite characters.
I'm impressed, my Manga collection keeps growing. I cannot help it. 😍🙋‍♀️